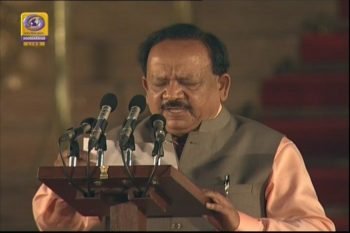 President Ram nath Kovind  the oath as Cabinet Minister to Dr Harsh Vardhan, at Rashtrapati Bhavan in New Delhi on May 30th.

takes charge as the Union Minister for Health and Family Welfare, in New Delhi on May 31st

Harsh Vardhan, an ENT specialist and a former five-time MLA, He was appointed Minister of Health and Family Welfare during the Narendra Modi government’s first stint in 2014 and later, given the charge of the Ministry of Earth Sciences and Ministry of Science and Technology.

In May 2017, Dr Harsh Vardhan was given the additional charge of the Ministry of Environment, Forest and Climate Change following the death of Union minister Anil Madhav Dave.

The sixty-four-year-old was re-elected to the Lok Sabha from the Chandni Chowk seat, winning it by a margin of over 2 lakh votes this time.