All astronauts of NASA face space weightlessness. In a gravity-free environment, the long-term effect of prolonged time spent is that it weakens the body. Space flights atrophy the muscles and decrease the density of the bones. NASA has athletic trainers and physical rehabilitation technicians on staff to get astronauts into shape for space flights to prevent that, or at least limit the damage. Trainers also teach astronauts how to keep their bodies in perfect shape during the flight and then work with them to restore their physical condition after returning to Earth.
The G-Trainer 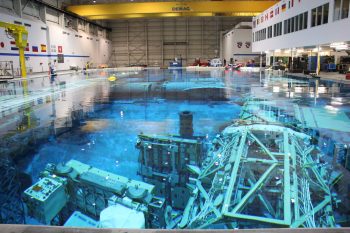 In the late 1980s, with new in-flight, in-space exercises, NASA researcher Robert Whalen was tasked with finding ways to help astronauts maintain their strength. Exercising requires weights to simulate the effects of gravity on Earth in order for a body in space to maintain its normal physical condition. In space flight exercises, Whalen proposed to use differential air pressure. Weighing astronauts with air while exercising would mimic gravity, preventing degradation of the bone and muscle.
Up to that point, astronauts had both difficult and imperfect mid-flight exercise. A steep, anti-gravity treadmill was the standard equipment of NASA. Astronauts have been harnessed to the machine to stay in place. Not only was that uncomfortable, but it also stifled the muscle movement that it was supposed to help. By applying high air pressure forces specifically calibrated to match the effect gravity would have on that astronaut, Whalen changed the treadmill concept.
The G-Trainer of Whalen is like a treadmill in a bouncy castle. The user climbs above the tread into an airtight hole. Once there, the astronaut runs or walks, and the machine calibrates the inflatable sections, applying air pressure to the weight of the astronaut, lifting the body as necessary to push back on the lower body and providing manually the same service as gravity does naturally.
NASA and Whalen licensed the G-Trainer’s patent to a company called Alter-G, Inc. in 2005, which adapted the machine for both medical and athletic use. Its AlterG Anti-Gravity Treadmill supports patients with decreased lower-body strength in physical rehabilitation. But there is a big difference between it and the NASA model, because the treadmill is doing the opposite of what it is doing in space on Earth technically. The air adds weight in space, providing healthy resistance. It unloads weight on Earth. Today, the G-Trainer is widely used by both professional and college sports teams in rehabilitation centers, military hospitals and training facilities.
NASA shares its knowledge with the athletic training community actively, even offering an internship in athletic training. The internship offers valuable, real-world experience to students pursuing a career in athletic training. It covers physical medicine and muscle and bone rehabilitation, as well as actual patient physical evaluations (including astronauts). Practitioners can also help design rehabilitation and training schemes.