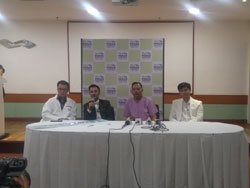 This distant dream has become a reality. Heart team lead by Dr. Amit Bhushan Sharma, Associate Director, Interventional Cardiology and Dr. Mahesh Wadhwani, Chief of CTVS successfully performed the first TAVR at Paras Hopsitals, Gurgaon on 20th March, 2018 on a patient who had severe narrowing of the heart valve and was shifted from Jammu.

The patient had gone into the repeated heart failure and was refused surgery in Jammu. Paras Hospitals, Gurgaon becomes one of the few centers in India, performing this surgery. In India, only 25 to 30 such procedures have been conducted till date, with only some hospitals being equipped with the technology and trained medical staff to conduct surgeries using TAVR. This procedure is commonly used in West as a first line therapy and in places in Western Europe like Germany and Netherlands, it has over taken SAVR (Surgical aortic valve replacement), But in India, lack of awareness and skilled doctors and adequate infrastructure and high cost have ensured it as a rarity.

“We have always believed in upgrading ourselves with advance medical learning, knowledge, infrastructure, and technology to be in a position to provide premium quality care to the patients. In an important step, a recent cardiac surgery performed at our hospital in Gurgaon, a 64-year-old patient, Ashok Sharma, underwent TAVR successfully. This highly symptomatic patient who was hardly able to walk even a few steps greatly benefited from this surgery and is miraculously now able to perform all normal activities all within in a span of 36 hours and not only that patient regained consciousness within minutes after surgery, says Dr. Amit Bhushan Sharma, Associate Director, Interventional Cardiology, Paras Hospitals, Gurgaon. He attributes the entire the success to the heart team comprising of interventional cardiologist, cardiac surgeon, ECHO team, Radiology team and supporting teams such as cardiacanaesthetists and intensivists .

Today TAVR technique approach is via the biggest artery which passes near the groin (the same artery which is used for stenting). This is called as Trans-femoral approach and the valve is just delivered like a stent. Two most advanced technologies in the world – Self expanding Valve and Balloon Expanding Valve are available in Paras Hospital, Gurgaon. All these techniques are performed inside the heart within a space that is fraction of a millimeter wide. This calls for precision, experience and a steady hand in addition to the vigorous battery of tests which the patient was subjected to before labelling him suitable for the procedure, says Dr. Mahesh Wadhwani, Chief of CTVS, Paras Hospitals, Gurgaon.

“There are multiple benefits of the procedure being minimally invasive. It aids faster recovery, minimizes chances of infection, is less painful, involves shorter hospital stay for patients, less scarring or surgery marks, and decreases chances of injuries to nearby tissue.  It is a fairly new US FDA-approved procedure for people with symptomatic aortic stenosis, which means obstruction of blood flow in the major valve of the heart, and is specially designed for those who may be at high life risk in case a standard valve replacement is done.”

This cutting edge medical technology can keep your heart as good as new as this re-establishes Paras Hospitals, Gurgaon in the field of Cardiac Sciences.