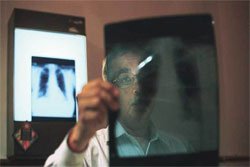 TB in India was defined as a notifiable disease in 2012. However, there was no provision for penal action. Clinical Establishment Act, 2010 defines clinical establishments which include diagnostic services, dispensaries, hospitals and clinics. This act also defines the centre operated by single doctor.

The Union Health Ministry said in its notification that “to ensure proper tuberculosis diagnosis and its management in patients and their contacts and to reduce tuberculosis transmission and further to address the problems of emergence and spread of drug-resistant tuberculosis, it is essential to collect complete information of all tuberculosis patients… Healthcare providers, termed as clinical establishments henceforth, shall notify every tuberculosis patient to local public health authority, namely, district health officer or chief medical officer of a district and municipal health officer of urban local bodies in whatever way they are known; or their designated district tuberculosis officers in a format as specified,”

It has been learnt that TB kills an estimated 4,80,000 Indians every year. India also has more than a million ‘missing’ cases every year — these are not notified, and most remain either undiagnosed or inadequately diagnosed and treated in the private sector.