Epilepsy is one of the oldest disorders of the brain, affecting more than 60 million people worldwide. It has no age, racial, or geographical boundaries. It’s sudden and dramatic appearance has mystified mankind since a long time, no wonder it is surrounded by prejudices and myths. In the past, the popular belief was that Epilepsy is contagious, people used to spit at a person with this condition and refused to use the same dish. Even now, despite significant scientific progress, people with Epilepsy continue to suffer from discrimination—not only in the developing world but also in the supposedly enlightened West. Until the 1970s, it was illegal in few countries to deny persons with seizures entry in restaurants, theatres, recreational centers and other public places. These employment and legal restrictions further perpetuated the stigma attached to Epilepsy in modern society. 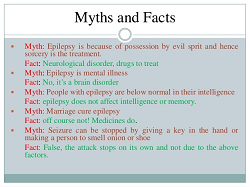 Epilepsy or seizures is one of the most common neurological disorders in India, with a prevalence of 5 per 1000 people; translating into a burden of more than 5 million cases. Seizures, sometimes called ‘fits’ or ‘attacks’ can be frightening for those who have never witnessed one before.  This involves a person’s muscles to stiffen, losing consciousness and falling to the floor. The body rhythmically starts jerking which is called “tonic-clonic seizures” as the body is first stiff (tonic) and then has a rhythmic jerk (clonic). In few people, the Epilepsy might just disappear, this is called Spontaneous Remission.

Some facts about seizures:

The Myths about seizures:

There are those who are born with it while others have their first seizure at an adult age. While genetics can play a factor, there are other more common causes of Epilepsy, such as head trauma, brain tumour  and stroke, to name a few.