As per global studies, obesity is no longer just any other lifestyle disease but becoming an epidemic and one of the leading contributors to the global disease burden. Bolstered by unhealthy lifestyle habits, youngsters are becoming the biggest victims resulting in rising incidence of juvenile obesity. 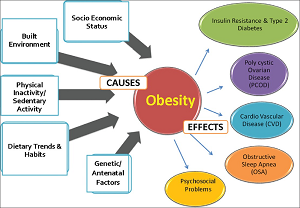 A survey by Max Healthcare, conducted in Delhi NCR reveals that at least 40% children (5-9 year olds), teens (10-14 year olds) and adolescents (15-17 year olds) in the region are overweight or obese. The survey further delves into insights from about 1000 parents of overweight and obese children and adolescents, which reveals 84% girlsand 82% boysare physically and emotionally affected by their body weight issues.

Interestingly, out of a range of factors leading toobesity over eating (72%) followed by genetic reasons (40%) and unmonitored food habits (33.5%) are the leading factors of weight gain

Choice of food (low-nutrition/ high calorie),frequency of eating outand large portion sizes– all these aspects come together to become an unhealthy lifestyle choice not just among teenagers (10-14 year olds) and adolescents (15-17 year olds), but in children as well (5-9 year olds). These poor eating habits eventually manifest into a full-fledged eating disorder over a period of time.

Parents of obese children agreed that they are very impressionable and get influenced by a lot of things. On the one hand, parents are using food as a reward/ means to distract children; on the other hand, peer pressure, social media and advertising, academic stress and mood swings are playing havoc with eating choices. Emotional eating and binge eating are hence becoming very common among young children.

Additionally, the kids aren’t burning it out, thereby compounding the problem. The survey reveals that only 30% of Delhi NCR’s children are physically active.

And the biggest underlying cause for all these is poor sleeping habits. According to Dr. Pradeep Chowbey, Chairman, Department of Minimal Access, Metabolic and Bariatric Surgery at Max Healthcare“Youngsters are sleeping late and often resort to midnight binging. They do not burn any calories after their eating late at night as they sleep after that and at the same time during the day, they are lethargic thus burning very less calories in the day. Moreover, the increasing screen usage time among children these days causes a lot of emotional and hormonal changes. Stress hormones and steroids production is increased in the body which in turn increases the appetite thus contributing to weight gain.”

All of this is visible in the coming of lifestyle diseases among children.

In conclusion, the survey draws co-relations between factors that are making early onset of lifestyle diseases an alarming reality in Delhi NCR. It also highlights how leading causes of obesity are resulting in physical and emotional damage to children, teenagers and adolescents in the region.