Lung cancer is the leading cause of cancer-related deaths across the world, characterized by low survival rates and aggressive malignancies. While lung cancer was considered uncommon in India till the last decade, its numbers have risen alarmingly in recent 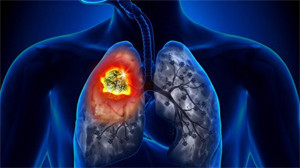 years, with a large number of non-smokers also falling prey to the deadly disease.

“The past few years have witnessed a spike in numbers of lung cancer patients in India. The incidence has risen at an alarming rate of up to 15% over the past decade. While there is no clear evidence of the exact cause of this rise, we take into account high prevalence of smoking aided by factors such as increasing environmental pollution and increasing exposure to chemical substances as the plausible causes,” says Dr Chanchal Goswami.

Another trend characteristic to India is the disease’s prevalence in relatively younger men and women as compared to western countries. While the average age of lung cancer patients in the west is the mid 60s, in India this is much lower. In fact a lot of patients are being diagnosed in their early 50s.

“Unfortunately, late diagnosis remains a norm rather than exception in India where people often hesitate to visit doctors. The disease is also marked by low survival rates, unlike other cancers whose survival rates have increased in recent years due to better treatment modalities,” adds Dr Goswami.

Of equal pertinence is the steady increase in numbers of non-smokers falling prey to lung cancer, once considered an exclusive ailment of smoke addicts. A large share of non-smoking patients are women who might have had exposure to second hand smoke all their lives at home or even no exposure at all in some cases.

“This does not mean that smoking is any less harmful. While 90% of the risk for lung cancer is attributable to exposure to smoke – both direct and passive – other factors do seem to play an increasing role too. These include exposure to carcinogens like arsenic, pesticides, asbestos and harmful particulate material floating in the smoky and deadly air of our highly polluted cities,” opines Dr Goswami.

Smoking doesn’t just harm the smoker himself. It harms the environment around him, causing many people to inhale the dangerous fumes emanating from his cigarette butt. At the same time, long-term smoking may also cause some kind of genetic mutation that can be inherited by the next generation, making the person highly susceptible to lung cancer. So, while you as a smoker may be lucky and not suffer from lung cancer, your child may inherit the mutated smokers’ gene from you and may go on to suffer from the deadly disease even while being a non-smoker himself/herself.

Ban on public smoking, and pictorial warnings have been the right measures initiated in recent years in India. More steps are needed to nail home the point among youngsters that smoking is ‘NOT COOL’. Unfortunately, even as mass campaigns are being initiated against cigarette smoking, the repackaging and revival of the hookah culture among urban Indians is a worrying trend. The mushrooming of hookah parlors and bars across our urban landscape neutralizes all successes made against the cigarette.  There is also a note of concern for increasing number of young urban woman taking to smoking.

Apart from taking radical steps to reduce prevalence of smoking – cigarettes, cigars as well as hookahs, steps also need to be taken to improve diagnosis and early intervention.

Due to rampant prevalence of tuberculosis in India, cases of lung cancer often get mistaken for tuberculosis and even treated for the same in initial days. Most lung cancer cases are detected in late stages by the time it is too late for treatment and cure.

“With symptoms such as fever, cough, weight loss and anorexia common to both tuberculosis and lung cancer, it is equally important for both patients and medical practitioners to stay alert to other indicators such as age of patient, history of smoking, or hoarseness in the voice. These indicators can point to the possibility of lung cancer early and ensure timely treatment,” informs Dr Goswami.

How to Minimize Risk:

Say No to Smoking: Survival rates of lung cancer patients remain low in India as also across the world. Most lung cancers in India are aggressive and progress fast. In such circumstances, minimizing risk remains the main option. And quitting smoke – all kinds of smoke be it cigarette, hookah or cigars — is the primary risk reducing method.

Reduce exposure to polluted air: Wear masks on the roads to minimize inhaling of dangerous chemicals and particulate material. Also, select low pollution phases of the day such as early morning for activities like walking and exercising outdoor.

Keep Alert for Symptoms: Early diagnosis can go a long way in saving or prolonging life of patients. Symptoms such as shortness of breath accompanied by fever, cough, bronchitis or hoarseness of voice should never be ignored. In India these symptoms are often mistaken and treated for tuberculosis. This calls for greater alertness and awareness.