Various aspects of cleft lip and palate surgery were addressed during the training sessions, which will be held annually. Cleft lip is a birth defect that affects 1 in 750 to 1,000 births. A first such training 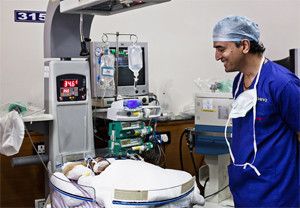 Deutsche Cleft Kinderhilfe is a non-profit organisation aiding the care of underprivileged children who are born with cleft lip, cleft palate and other facial malformations. In India, the German NGO runs 12 cleft centres.

According to Dr. Samarth Shetty, consultant craniofacial surgeon,  Narayana Health City, such birth defects among newborn babies are seen more often in marriages within the family and also due to genetic factors. The corrective treatment involves a series of surgeries along with speech and swallow rehab therapy with multidisciplinary approach leading to a cosmetic surgery, which is a long process planned over a period from birth to adolescence.

Two such surgeries were performed during the training workshop at Narayana Health City that was partially funded by Deutsche Cleft Kinderhilfe e.V.

Commenting on training of doctors from Afghanistan, Dr. Shetty said that unlike India where there are specialists for different types of surgeries, in Afghanistan, a general surgeon has to upgrade his skills and perform these corrections too.