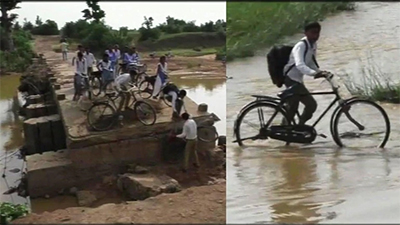 Children from a village in Madhya Pradesh struggle to cross a river through a damaged bridge. Villages named Dadraudi, Kodar, Bartarai and few others are known to have schools on the opposite side of the river and students out there seem to be struggling while reaching out to their respective schools. 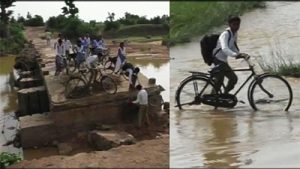 The bridge which broke last year was given a try of rectification by the residents of the village who used soil over the bridge, but the flood of this year got it washed away. One of the children reportedly said that he can’t go to school when it rains.

Even women are known to risk their lives by crossing the small river through the damaged pull.

The district education officer Umesh Dhurve reportedly said that if the bridge breaks, he will be informing the concerned agency or department about it. He also stated that he will also speak to the Principal of the school and enquire about an alternate way to school.