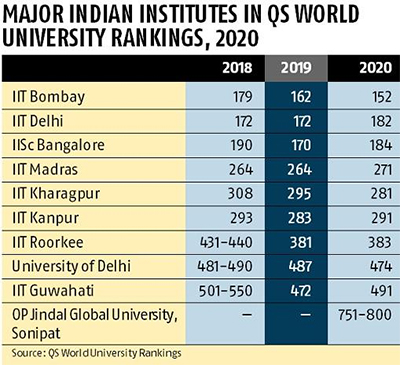 The QS World University 2020 has been topped by IIT Bombay. Ranked at the 152nd position, The Indian Institute of Technology (IIT) Bombay has also become the first to be featured in the list of global top 200 this year.

IIT-Delhi and Indian Institute of Science (IISc) Bangalore are the other few names in the top 200 who stood at 182nd and 184th position respectively. 5 US based universities were amongst the top 10 in the 16th edition of the QS world ranking.

A tweet by Ramesh Pokhriyal Nishank, the Minister for Human Resource Development reads, “It is a proud moment that in the prestigious QS ranking, IIT- Bombay, IIT-Delhi and IISc Bangalore have been included in the list of top 200 global universities”.