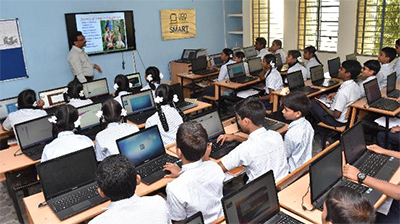 Identity cards for students will be launched by the Chief Minister, Edappadi K Pananiswami, on Thursday. These cards are to be distributed amongst 70 lakh children across the state according to an announcement made by School Education Minister KA Sengottaiyan.

The ministers during a conversation with the media said that the smart cards will consist of QR code technology which would be linked to vital details such as name, date of birth, attendance, ID, blood group, address and photograph. These vital details will be obtained from the common database.

A senior official from the School Education Department have reportedly said that these cads will be help the parents to keep a track of their children and in any case the student hasn’t turned up in school, asms will be sent to the parents.

The entire process of printing and distributing of smart cards is on the is in the hands of the Director, Tamil Nadu TextBook and Educational Services Corporation. This order was issued by the government in October 2018 at a budget of nearly Rs. 12.71 crore. The order suggested that any additional expense would be taken before the Assembly as adding any unexpected expenditure would be met from a contingency fund. An official has reported that a channel named Kalvi TV which would be owned by the Education Department is also to be launched soon. Contents including interviews of School Education Minister, NEET and other classes segments on Tirukkural, shows on schemes of the department and other literary programmes will be broadcasted on this channel. This channel is supposed to operate out of the eighth floor of the Anna Centenary Library, Kottupuram.

It was post signing an MoU with UNESCO, New Delhi that Sengottaiyan came in terms with the Media. This deal is for the advancement of the health and well-being of adolescents in middle, secondary and senior-secondary schools of Tamil Nadu. He has also said that Tamil Nadu has turned up to be the first state to tie up with UNESCO on an anti-bullying campaign.  According to sources a weekly training of government teachers by the UNESCO members is also a part of the planfor the prevention of bullying.

The Transport Minister MR Vijayabhaskar has reportedly declared that smart free bus passes will be provided to 24.2 L students.