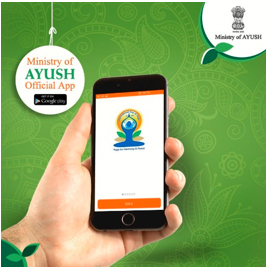 Ahead of the International Yoga Day on June 21, a mobile application has been launched by the Ayush Ministry in order to enable people to locate events and centres providing yoga training. According to an Ayush Ministry official, the users will also be able to avail certified Yoga instructor.

According to himan app called Yoga locator which will be map based would enable yoga instructors to reach out to the maximum number of people by registering themselves.

It is supposed to be a permanent app which will help with information about Yoga activities, taking place in proximity of the respective areasthroughout the year. There are more than two lakh yoga instructors working unofficially in the country and this app will allow them to enrol themselves.

While the International Yoga Day would be celebrated on 21st June across the globe, five cities have been shortlisted by the Ayush Ministry- Delhi, Ahmedabad, Mysore, Shimla, and Ranchi for organising the main function this year.

Narendra Modi got elected this year as the Prime Minister of India for the 2nd time in a row and post that this is known to be government’s first mega public event. According to sources, the shortlisted names of the cities have been sent to Prime Minister’s Office (PMO) and his final call will decide the venue of the main function of the International Yoga Day taking place on June 21st.

Following that event, a two-day yoga Mahotsav is also being planed in Delhi by the Morarji Desai National Institute of Yoga starting Saturday. About 10,000 people will be attending this event which would also include yoga teachers, professional and enthusiasts among others.

June 21st got declared as the International Yoga Day by the United Nations in the year 2014 after Modi called this day out to be adopted as the global celebration of Yoga based on the ancient practice that started in India more than 5,000 years ago. Last year, it was at the ground of Forest Research Institute, Dehradun where the main event of the International Yoga day was celebrated. Even PM Narendra Modi said to have participated in that event.

The first ever celebration of International Yoga Day was held at Rajpath in New Delhi on 21stJune 2015 which was joined by representatives of 191 countries. In 2016 and 2017 the main functions were organised in Chandigarh and Lucknow respectively.