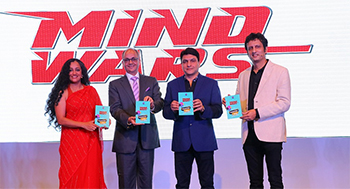 Zee Entertainment Enterprises Ltd. (ZEEL), a media and entertainment powerhouse, announced the launch of “Mind Wars” for school students across India, one of the world’s largest quiz program. As yet another pioneering step by the media & entertainment powerhouse, Mind Wars is a first of its kind initiative that will be hosted on a multi-platform ecosystem, providing a comprehensive program of knowledge acceleration for grade 6 to 10 students.The company aims to leverage the power of its multimedia prowess to build a property with an unprecedented on-ground presence across the country that will span both digital and TV. The company also aims to increase the knowledge quotient of more than 1 crore students from 40,000 schools across more than 200 cities across India.

With this initiative, ZEE aims to offer a robust knowledge-based kids entertainment platform that will be hosted on its state-of-the-art digital entertainment platform–ZEE5–in line with its macro-level strategic intention to integrate technology with its content offering. ZEE5 will enable and enhance participation levels with its robust technology and customized user-friendly interface, providing easy access to 1 crore students across the nation.

Mind Wars will provide an open platform for school children to use multi-platform testing formats across three content buckets to benchmark them against their peers on a national scale: curriculum, general knowledge, and current affairs.  The series of knowledge will take place in the following sequence of events:

Online Qualifiers: To be held online on the ZEE5 app and website resulting in 40000 + school teams being formed with 2 champions per school.

State Finale: To be held in 32 Indian and Union Territories resulting in 32 winning school teams being crowned as ‘State Champions’.

Mind Wars will host a database of over 10,000 questions across the three buckets of content –curriculum, general knowledge, and current affairs. While the question level is for grade 6 to 10, in its advanced stages, the platform will also be developed for higher age groups. Mind Wars was designed, created and curated by the Zee Entertainment subsidiary, Essel Vision Productions Limited.