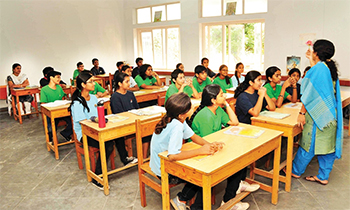 In 2016, a national survey of 27,000 engineers concluded, among other surprising findings, that almost 80% of these engineers are fundamentally unemployable. This is particularly drastic in a country that in contemporary times has much more appreciated the engineering profession than any other. Automation and interdisciplinary forms of employment will be rapidly introduced with the advent of the Fourth Industrial Revolution. They will, in time, carve new bastions within the traditional career paths to which most professionals may currently be accustomed.

According to a NASSCOM study, in the wake of increased automation and changing industry demands, nearly 40 percent of India’s workforce (about four million professionals, recent graduates, and experienced workers) need to be upgraded over the next five years. Nearly every member of the ecosystem-potential employees, existing professionals, businesses, universities and colleges, and studentsshould be cautious about the looming threat bundled with the far-reaching promises of the digital revolution. In fact, the revolution is not limited to mere digital boundaries in scope and scale.

A convergence of thinking between governments, players in the private sector, and the student-professional base must be at the center of the novel treatment of education.

Indeed, in recent times, accusations of’ jobless growth’ have become commonplace, and if India were to live up to its hype of being the world’s fastest-growing major economy, it would have to provide a quality education that can transform students into truly employable professionals. Education technology can only provide the crucial crutch for a healthier transformation through reskilling and upskilling options or even through casual forms of learning through the online medium.