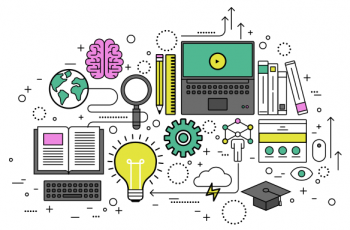 A step taken by a teacher towards making her students engage with the day-to-day lessons instead of merely learning them: Technology again becomes the go-to-tool. Technology has been helping a lot for revolutionising the way Indian school-children are learning ranging from a multibillion-dollar education start-up to wired-up mannequins.

There has been a surge in smartphone ownership for the sake of engaging millions of youngsters with animated video lessons and interactive games. However, advantages of this are being taken from a host of online platforms.

The app is a form of compensation for students who want extra tuition away from crumbling schools and over-crowded classrooms. In India where the education system has already been suffering from a lack of investments this app is nothing but an aid.

India’s growing “EdTech” industry is being helped with funds which is provided by major foreign investors as they look forward to capitalising on the world’s largest school-age population as in the students who face fierce competition for university places.

Byjus is an educational organisation has become one of the largest online learning sites in the world since it was founded in Bangalore in 2011. This company is right now embarking on an ambitious expansion in the overseas.

One start-up out of the dozens is literally betting that children are deliberate to learn differently from techniques of rote memorisation that are generally used across Asia.

According to research published two years ago by accounting group KPMG, its online education sector is assumed to be worth US$2 billion to Asia’s third largest economy by 2021. India has children estimated around 270 million who are aged between 5-17 and this company aims at children of that age.

According to analysts, Technology, has the power of transforming education in India this is also to be noted that now it is largely the domain of middle-class families.

Pooja Prashant Sankhe, a teacher of a state-run school in Mumbai has been using technology in a different manner to change the way pupils engage with lessons.

An Amazon Echo device is generally hidden in a shop window mannequin by the 45-year-old. This device is known as “Alexa”.

Children aged around 11 approached the mannequin and asked questions like “how many states are there in India?”, they also did some mathematical sums and asked Alexa for the answer, to ensure if they hadn’t made any mistake and done them correctly. The device begins with playing the Indian national anthem when the school hour starts and plays healing music during the meditation sessions.

Ms Sankhe reportedly said that the kids get very excited when they get to ask her questions and Alexa has made them be regular to the school as well.