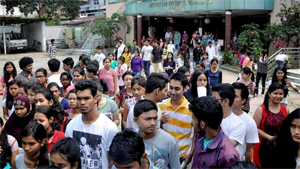 CBSE Results 2018: The Central Board of Secondary Education (CBSE) is likely to announce CBSE Class 12th exam results on May 28. The board is also likely to release CBSE Class 10 results results days after releasing Class 12 results. The results will be announced on cbse.nic.in, cbseresults.nic.in.

Earlier, there were reports that results of both CBSE Class 10 and CBSE class 12 is likely to be delayed due to the paper leak scandal and subsequent Economics paper re-test on April 25. However, the board has refuted these allegations.

3. Enter your roll number and date of birth

4. Take a printout of the result for future reference.

The reports of leak of the CBSE papers had caused disappointment among students across the country last month. In Delhi, students held protests accusing the CBSE of negligence and demanded immediate action against the guilty.

According to Delhi Police, the class 12 economics paper was leaked on 23 March – three days before the scheduled date of the examination.

Investigators made arrests in several parts of the country in connection with the case, including in Jharkhand and Himachal Pradesh.

They claimed to have arrested the main conspirators behind the leak from Una in Himachal Pradesh. The three people were staffers of a school in the town.

The leak was exposed after an envelop containing four images of the hand-written economics paper was delivered to the CBSE headquarters in Delhi on the evening of the scheduled day of the examination — 26 March.

Following reports of the leak, on April 2 CBSE tried a “leak-proof” system of “encrypted” question papers, which delayed the exam as a few centres in Delhi were unable to follow the printing of encrypted papers, e-mailed to them, at the school itself.

The HRD ministry then set up a committee to examine the process by which the CBSE conducts examinations.

The committee has to submit its report by May 31 to the Human Resource Development Ministry.