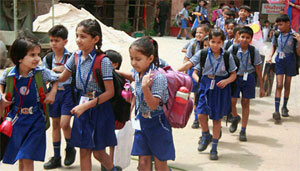 Education has continued to evolve, and widen its reach and coverage since the dawn of human history. It lays down the path to positively achieve desired goals in life. It plays a crucial role in socio-economic and political transformation of a country and simultaneously is one of the essential variables of human development. The role of education is not only to strengthen the foundation of democracy, but also to raise good citizens.

Punjab has a long and significant history of formal and non formal education. Today, the primary education system is plagued with a slew of challenges. Traditionally, the sector has been branded by underpaid teaching staff, poor infrastructure, and an unmotivated student population. Another major challenge is gender disparity and the resulting financial and societal obstructions that prevent girls to access primary education.

As per the latest report by the HRD ministry, a survey of all schools across India, Punjab has one of the poorest averages of just four classrooms per school at primary level in government schools. Approx. 19.33 per cent of government primary schools in Punjab have SCR greater than 30.

84% of primary-age students were enrolled in primary school in 2015-16 in the state, but only half (51.6%) of secondary-age school students were enrolled in secondary school. Though learning levels in the state are higher than many other Indian states, many students are left behind, and others don’t learn at the grade level. For instance, in 2016, in rural Punjab, less than half (48.7%) of grade III children surveyed in households could subtract, while as few as 35.2% could read a grade II level text.

Lack of classrooms, over-congestion of existing ones and unavailability of basic electricity or drinking water are some reasons as to why students dropped out or cut classes.

Improvement of quality of school education in Punjab

To take the quality of elementary education in Punjab to a new level, it is strongly felt that something innovative needs to be done to make this qualitative learning creative and joyful. The grass-roots level education i.e. primary and upper primary education is the most important component of education system as it is the foundation of middle and higher education. It is the most crucial stage of education spanning the first eight years of schooling and lays the foundation for the personality, attitudes, social confidence, habits, learning skills and communicating capabilities of the students. The basic skills of reading, writing and arithmetic are acquired at this stage, values are inculcated and environmental consciousness sharpened. Hence, special focus should be on primary schools as qualitative education serves as a strong foundation in the academic career of a child and has a direct impact on the nation’s progress as well.

To give impetus to education, schools and institutes should focus on providing a good infrastructure and faculty to not only ensure ‘schooling for all’ but also ‘learning for all’. The system of education should be learning-centric rather than exam-centric. In a bid to strengthen the foundation of primary education, educators need to draft strategies that entail periodic evaluation of schools and teachers’ work alongside, inclusion of co-curricular activities as extra curricula activities such as sports, literary and cultural activities, positively boost the morale of the students.