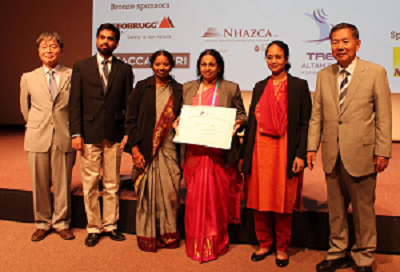 ·         At the 4th World Landslide Forum in Slovenia, the International Programme on Landslides (IPL) awarded this title as global recognition for Amrita University’s significant contribution towards landslide risk reduction
·         Amrita University has successfully deployed the world’s first wireless sensor network system for detection and early warning of landslides
·         More than 12% of the land area in India is susceptible to landslides

Recognizing Amrita University’s cutting-edge research on detection and early warning of landslides, the International Program on Landslides (IPL) has bestowed on it the title of “World Centre of Excellence on Landslide Disaster Reduction.” The title, which the University will hold till 2020, was conferred at the 4th World Landslide Forum in Ljubljana, Slovenia. There are 20 such centres in the world, but none in India currently.

Amrita University has successfully deployed the world’s first wireless sensor network system for detection and early warming of landslides in Munnar, Kerala. At the request of the Government of India, they have also deployed a similar system in Sikkim, Northeast Himalayas. This applied research, with significant global value for all landslide prone areas, was directly initiated by Amrita University Chancellor Mata Amritanandamayi Devi to develop low-cost technologies for wide-area monitoring of landslides.

Maneesha Sudheer (holding the certificate) of Amrita Univ at 4th

Dr. Maneesha Sudheer, Director, Center for Wireless Networks and Applications, Amrita University, who spearheads landslide research, explains, “Amrita University’s recognition as a World Centre of Excellence will allow us to increase capabilities within India while working collaboratively with the United Nations and other globally renowned research centres. Building on our existing real-time monitoring and early warning system, we plan to develop a comprehensive framework including landslide hazard mapping, remote sensing, low-cost sensing, big-data analytics, and decision models. The next steps in our research will provide an opportunity to implement end-to-end systems for real-time monitoring, detection and early warning of landslides in India. We will also undertake development of low-cost MEMS sensors and big data analytics platform for disaster risk reduction.”

Landslides are the third most deadly natural disasters on earth, with $400 billion being spent annually worldwide for landslide disaster management. More than 300 people throughout the world die every year due to landslides. More than 12% of the land area in India is susceptible to landslides. The major landslide prone areas in India include Western Ghats and Konkan Hills (Tamil Nadu, Kerala, Karnataka, Goa and Maharashtra); Eastern Ghats (Araku region in Andhra Pradesh); North East Himalayas (Darjeeling and Sikkim) and North West Himalayas (Uttarakhand, Himachal Pradesh and Jammu & Kashmir). The landslides in Bangladesh which killed more than 150 people last week have starkly underlined the nature of the threat to life and property posed by them.

Amrita University was recently awarded another prestigious project by the International Programme on Landslides (IPL) to enhance the existing large-scale, real-time landslide monitoring and early warning system for landslide prone regions of the Himalayas and Western Ghats. This will entail designing and developing Intelligent Wireless Probes (IWP) containing different types of sensors and a low-cost GPS system, integrated with intelligent algorithms. The data collected from the field will be transmitted to an analysis centre, which will issue alerts if any potential landslides are foreseen.

The centre has also initiated a landslide-research project with the British Geological Society and UK Met Office to develop regional thresholds for landslide warning from the real-time data of AMRITA’s field deployment in the Himalayas and Western Ghats. This project titled LANDSLIP also engages the community in providing an integrated early warning system to reduce the landslide risk.

In 2008, Amrita University set up India’s first landslide laboratory, which serves as a test bed for development and validation of systems deployed in landslide prone areas. It can create small landslides under controlled conditions and act as feedback system for the field deployment.